Adam Cadre, great writer, great interactive fiction author, in this interview talks about different things, not only IF, but also books, movies, videogames, good writing. The interview begins with a review of Star Control II and continues with Photopia, Varicella, graphic adventures. And then, just as happened with Steve Meretzky, Adam gives us a gem: the notes he used to write his games.

Adam, what’s your favorite game ever and why?
Star Control II. It’s hilarious, the music and art are gorgeous, and I love exploration games. So all the surface elements are top-notch. But on the deeper level of gameplay, it’s also dazzlingly successful. There’s a galaxy full of stars to visit, and you can go to any of them once you have enough fuel, so there’s the feeling of a whole universe of possibilities, an amazing amount of content; at the same time, there are usually a handful of leads to follow — not too few, not too many. Just enough to allow players to make lots of decisions, both tactical (do I track down the distress beacon I’ve been told about, or check out that spatial anomaly those aliens mentioned, or try to fill in that blank spot on the map?) and strategic (do I build up my ship first and then explore? or explore as much as possible and hope that resources fall into my lap along the way? do I contact as many species as I can or only follow obvious plot threads?). And it’s that sort of decision-making that’s key to a fun experience, I think.

And the first one you played?
I don’t recall. Probably a touch-screen game at the Plato Center in Delaware.

The worst game ever?
I’m sure I haven’t played it. 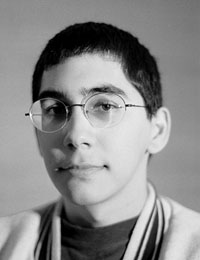 And the best author ever?
No such thing. Different people are skilled at different things. Plus, in many media, my favorite works have been created by people whose other work I haven’t much cared for. Watchmen is my favorite book, but most of Alan Moore’s stuff leaves me cold. The Sweet Hereafter and Three Colors: Red are my favorite films, but I haven’t really enjoyed anything else by Atom Egoyan or Krzyzstof Kieslowski. So is the best author the one who’s created the best work, or the one whose works are of the highest average quality…? There’s really no good answer.

Please, introduce yourself to the audience: age?
I’ll be 28 soon.

Your job?
When I send in my taxes I say I’m a writer, because that’s been where the vast majority of my income has come from over the course of the past few years. But I feel odd calling that a “job” since it’s not assigned work. I also do a bit of teaching, partly to make ends meet since writing income comes at odd intervals and partly because I write about teenagers so I figure it’s a good idea to actually interact with some every now and again.

What do you do when you don’t work, you watch movies and write games?
Actually, I don’t actually watch many movies. My records indicate that in 2001 I saw five films in a theater and rented six, three of which I’d seen before. Just for the record. I’d like to be able to say that when I haven’t been teaching a class or writing IF I’ve been working on my second book, but that’s far too rarely been the case. I dunno. I do all sorts of stuff. Most of it is squirreled away at http://adamcadre.ac somewhere.

And what about puzzleless game? I think that Photopia is a novel (an excellent novel with fantastic things like colors), but it is not a game: I think that IF should find the right balance to be Interactive.
Well, this has been discussed before. I think there are other kinds of meaningful decision-making than solving puzzles, and one of the nice things about the IF world today is that nowadays you’d be hard pressed to find someone who’d disagree with that. In an interview on ifMUD back in ’98, the subject of alternatives to lock-and-key type puzzles came up, and I said: “The interactivity comes in deciding where to go, what to see, what to say. Rather than having to open gates along a path, you discover that they’re all open at first, but stepping through one causes others to close. Like I said in the Xyzzynews puzzle conference,
if you’re in Houston, ad you decide to drive to New York, that takes you away from Los Angeles.” An excellent example of this would be Galatea.

What about your book?
Pretty much everything there is to know about it is here: http://adamcadre.ac/okay.html.

Do you’ll write another?
I’m working on it. Slowly and sporadically. Which I’m not happy about.

What did inspired you to write Lock & Key?
You can read the story behind it by winning the game. So, extra motivation there, if you’re into that sort of thing.

It is not a traditional IF game.
It’s actually significantly more traditional than what I initially had in mind (as detailed in the making-of notes.)

It seems that you always want to explore new things, while other people try to do as better as they can old things (traditional IF).
I can certainly see how it might seem that way. But I think it’s more that small experiments whose value lies chiefly in innovation can be out the door in a matter of weeks, whereas if your goal is lots and lots of interesting content, the game will take years to finish. I have a couple of games that I started in 1997 that won’t be done until the second half of this decade. If you were to look at a chronological list of the projects I’ve started rather than those I’ve completed, it’d look much more balanced between experiments and straightforward
works.

How much time do you spend to play IF every week?
Virtually none. I’ll have a look at new games to get the gist of what they’re doing, and I play the comp games in order to rate them, but very rarely do I play IF for enjoyment.

What’s the best game you have written?
Varicella. Photopia has made more of a mark, I suppose, but Photopia is a short story; Varicella is a world. There are so many things to see and do… it’s definitely the game of mine that I’m hoping that future pieces I might create will most resemble, in structure if not in content.

Do you play graphic adventures?
Not often. I’ve played a few Lucasarts games because my college roommate worked for them — in fact, he worked his way up from Monkey Island tester to lead programmer on Grim Fandango — but I was never really a big fan of computer adventure games. Star Control II being a notable exception, of course.

In the future you think will be possible to sell IF again?
I honestly don’t know. I don’t really see a big audience getting jazzed about the medium as such. Rather, I think that there’s going to have to be one particular product that people are after. And I doubt that any IF work, however good, is going to attract a lot of players on
its own merits — some other factor will have to come into play, like a license (Harry Potter’s been mentioned) or an author known from some other medium (as with Douglas Adams). Me, I’m hoping that my second book will be more widely read than my first, and my third book more widely read than my second, and so on, and that some of these people will try my IF. But even that seems kind of unlikely, since my books and IF are very different.

Tell us three rules to write a good game.
1) The pieces of text you write are the player’s reward for thinking of the command that calls them up. So make them rewarding. Every diegetic piece of text should have something to recommend it: a joke, a nice bit of imagery, a character insight, something.

2) The player should always have a pretty compelling reason to type something other than QUIT. The fact that something came out of your head may by itself make it fascinating to you, but you’ll have to put in some other source of interest and motivation before players will find it so.

3) Get into the habit of finishing things. One of the reasons I’ve released so many short pieces while working on the long ones is to keep from getting discouraged at working and working and not yet having anything to show for it. One of the best pieces of advice I ever received when I was just starting to write regular fiction was to stop writing the first chapters of epic novels and to instead write a three-page story from start to finish. And then to write a ten-page story, and then a 25-page story, and then an 80-page story, and only then to think about writing a novel. Something similar might well be true for IF. Because of course, you can’t write a good game if you don’t complete it.

And three for a good Npc.
1) The very medium of IF will help you write a good character; let it. Here’s what I mean. One trap many people fall into in non-interactive media is letting the plot dictate what the characters do, instead of being an actor for a while and looking through the character’s eyes and thinking, “All right, here’s the situation this person is in, and this is what she’s like — what does she do?” IF forces you to do it the right way, since you have to anticipate how the NPC would react to anything the player might try, not just the limited set of things you’ve put in your plot. So don’t fight that.

2) On the other hand, the medium also sorta *forces* you to write good characters or suffer the consequences. In a static work, you can throw in all the placeholder characters you want, have them say their one line (“D’you want fries with that?”) and then not give them another thought. In IF, people might try to kiss the cashier or ask the cashier about Jesus. There was a moment very early on in writing Varicella that I realized that not only was I going to have to implement all the characters I’d actually thought about, but also a dozen or more guards, and that those guards would have to be as fully functional as Sierra or Charlotte, *and* that they’d have to be different from one another. But this turned out to be a good thing, because the game is a much richer experience for having so many characters around, even if they aren’t all incredibly deep.

What’s the best Npc ever?
Galatea.

There is a book that you would like to “use” to write an If game? And a movie?
Inspirations, countless. Straight adaptations, no.

Adam Cadre, like Steve Meretzky, has an exclusive gift fot us: the handwritten notes used for his games. Go to see…