This is the first half of the interview with Andrew Plotkin, one of the most prolific and most innovative author of IF today. Reading the answers and playing his games there is always a question which jumps in mind: it's possible that a man like Zarf could not live just writing adventure games (or, better, interactive stories)?

Let's begin with ducks and Spider and Web: it's true that you left your job to write the game?
Heh. No, I left that job because I couldn't stand to work with my boss. I had enough money saved to take a year off, which I spent on several projects, including Spider and Web.

Zarf is you mysterious nickname: in an interview with you, Stephen Granade said that it is a hot coffee cup, typically made of ornamented metal, used in the Middle East? True, false or no comment?
Almost true — any dictionary will tell you that it's the holder for a hot coffee cup. The traditional Turkish zarf is made of metal, but the cardboard wrapper you get on your paper coffee cup at Starbuck's is also a zarf. If I had known that when I chose the nickname, I would have been much too embarrassed to start using it. (Thirteen-year-olds have such delicate pride.) 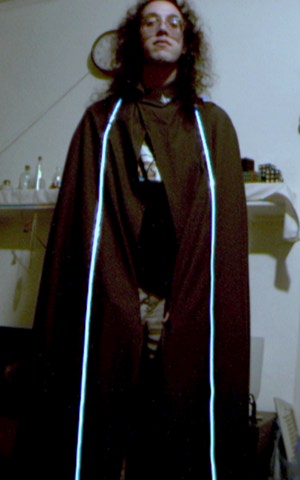 Being Andrew Emily Short, in a comment to Shade, mentioned Hitchcock: a nice comparison. Shade is a fantastic one room game and Hitch, one time, told that to make a movie one room would be enough for him (see Rope) or one phone booth. What do you think about this comparison and where did you take the idea for Shade?
Hitchcock's quote sounds like bragging – not that I never brag, of course. I would phrase it a little differently: a single room is just as viable a settling for a movie – or a game – as a house or a castle or a laboratory complex. The constraints are different, but constraints always shape art.

I certainly had that constraint in mind when I started designing Shade. I didn't know about Hitchcock's quote (I'm not a big Hitchcock fan), but I would have agreed with the comparison. However, the original idea for Shade was much older; I alluded to it in my XYZZY award acceptance speech in 1998 (I think). It wasn't a one-room game in the original conception. That came later, when I realized I wanted to write an entry for the 2000 IF Competition and I had less than two months to finish it.

Let' talk about Npc's: I think Deadline (written in 1982!) is a milestone for non player characters. Do you think that, in If of today, we made great improvements?
The characters in Deadline had impressive amounts of text built into them, but I never really saw them as great characters. The game encouraged you to treat them as encyclopedias — "consult Robner about pills". And they weren't all that exciting as people, either.

In some ways, Suspended did a better job with Npc's, even though all the Npc's were robots who existed only to obey your commands. Their very passivity meant that you had to interact with them using a rich set of commands – the full range of the Infocom parser, not just "ask", "tell", and "show". That, together with the vivid differences between their worldviews, made the robots memorable characters to interact with.

I don't think modern IF has made any quantum-leap improvements over Infocom's works. We've had more interesting and better-conceived people portrayed; we've had richer vocabularies and larger sets of responses; we've had more complex pre-programmed behavior. But those are all incremental improvements. I'm still waiting to see a character come alive in quite the same way that a setting came alive, back when Colossal Cave first defined interactive fiction by its own example.

And what's the best Npc ever?
Oh, hard to say. One of the characters from Worlds Apart, maybe.

And the worst?
The timber in Zork I.

And three rules to write a good IF game…
I've never written — no, never mind.

1) If the player types a command and knows what will happen, he should always be right.

2) If the player types a command and doesn't know what will happen, the result should always be more interesting than he expected.

And three rules for a puzzle.
1) The world you've created creates the puzzles. If you ignore this, you wind up with the same puzzles that are in everyone else's game.

2) However, ideas for puzzles can help create the world. Feedback works.

Dave Lebling, in a recent interview – realized by Philip Jong and Stephen Granade-, said that we are still far to create a real conversation in If? What do you think about this?
A dialogue in a novel doesn't react to my input, no matter how loudly I scream at the pages. We still consider that a real conversation – for the purposes of fiction. If you require an IF conversation to pass the Turing Test, then sure, it's far far away. But IF does not attempt to replicate reality. IF models, abstracts, and simulates reality, and attempts to provide the player with the appropriate range of choice for the work at hand. I think we've been playing around with experiments in ranges of choice, but none of them have really fit well into a whole IF game. The conversation has either stood on its own – not closely tied to the goal of the game-, or been too small a range – as in most menu-conversation games.

(End of the first half of the interview)