An interview with Keith Blount, the man behind Scrivener, excellent writing software, a wonderful tool for writers of any kind! 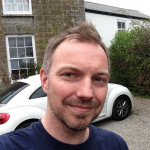 Keith Blount shot a photo of himself for our website

Why did you create Scrivener?
I got the idea when I was struggling with my own writing. I had a whole bunch of Microsoft Word documents in various folders on my computer, and I kept writing summaries of various parts on index cards or in Excel spreadsheets, shuffling them around, and then reordering the text in Word once I’d found a structure I was happy with. I also had a bunch of research files and notes, and it was awkward arranging everything on screen so that I could refer to my research at the same time as writing. And I thought: there must be a better way of doing this; this could all be done in a dedicated software program. So I looked around, and there were a few great writing applications, but nothing that did what I wanted. So, I decided to write my own app.

Are you a programmer?
The first major hurdle was that I wasn’t a programmer! I was so keen on having this program, though, that I taught myself how to code. I bought a couple of great books on programming for the Mac (Programming in Objective-C by Stephen Kochan and Cocoa Programming for Mac OS X by Aaron Hillegass), and I spent four or five months learning, all the while planning how the program was going to work. This was in 2004. I then spent a year building the application, and I released a very early beta version for participants of National Novel Writing Month (nanowrimo.org) to test in November 2005. That was really a learning experience, though, so I scrapped it and started again with a complete redesign. Scrivener 1.0 was officially released in January 2007 – so it took me about two-and-a-half years from when I started in on it properly, although the idea had been percolating for a few years before that even.

So, you are a geek and you did not finish the novel you were writing when you decided to program Scrivener…
Guilty as charged! Although that novel is finally coming together, honest!

At one point, Scrivener has become your job and you founded a software house… your story, indeed, is the story of a successful start-up.
This is true. When I first started working on Scrivener, it was all in my spare time as I was a primary school teach (teaching 8-10 year-olds). I was living in London at the time. When I moved to Cornwall, I realised that Scrivener was earning more than my teaching job, so I went full-time.

Why you named Literature and Latte your software house?
Literature and Milk doesn’t sound nearly as good! “Latte” over here (and in the US, I believe) always refers to caffe latte. So if you ask for a latte over here you get a coffee – I know I’d just get a glass of milk if I asked for that in Italy. I never thought of how odd our company name must sound to Italians!
The reason for the name, though, is simply that when I was younger I day-dreamed of opening a coffee shop that also sold books, and I was going to call it Literature and Latte. So, when I needed to think of a name for the company, I just used that – I didn’t want anything to techie-sounding, anyway, because I wanted to draw writers. Plus, I just liked the way it sounded. In retrospect, had I realised how often I would have to type out “literatureandlatte”, I would probably have chosen something shorter…

Please tell us, in your opinion, the THREE most important/useful features of Scrivener.

Easy, as there are three features I created it for:

1. The ability to split up a long manuscript into smaller sections, and to view each chunk in isolation or together with the other sections as part of the whole.

2. The ability to assign each of those sections a synopsis, which can be viewed separately on a corkboard or in an outliner, so that you can rearrange the sections while only looking at their synopses.

3. The ability to split the editor into two panes and to view your writing in one pane and research in the other pane – whether that research is another chapter, notes, a PDF file, an image, a web page or whatever.

There are famous writers and screenwriters using Scrivener?
There are few big names that I probably can’t mention because I don’t have permission, but also:
Neil Cross, who wrote the recent US box office number 1, Mama, and who also writes for Doctor Who.
David Hewson, a best-selling British author who is best known for his Rome-based novels featuring the detective Nic Costa.
Actually, it’s probably easiest just to refer you to our testimonials page:
http://www.literatureandlatte.com/testimonials.php

After this interview, many authors of interactive fiction, I think, will be interested in Scrivener: did you ever think to address your app to this kind of writers/authors?
I guess not, but then there are all sorts of writers that I never knew would be interested in using Scrivener. For instance, along with academics, we also have a lot of lawyers using Scrivener, putting together case briefs.

One of the strengths of scrivener is that you respond quickly to requests for help and accept the advice of the users for new features. There is some feature you did not think about but you introduced only after requests from users?
That’s a difficult question. Usually what happens is that when someone suggests something, I consider whether it fits with Scrivener, and if it does, then I chew over how it can be integrated for quite some time. I suppose in terms of major features, the freeform corkboard mode of Scrivener would be something I wouldn’t have thought of adding myself. There are literally hundreds of smaller features that have arisen from user suggestions, though. Users are always coming to the app with fresh eyes, so as a developer you always have to be ready for someone seeing something that seems an obvious improvement which you missed. Of course, you also can’t add every single feature that users suggest, or you’d go insane and end up with a program that’s a mess! But we do have a really great and lively community on our user forums, and one of the most unexpected bonuses of developing Scrivener has been interacting with so many smart users.

I really appreciated the trial version: thirty *effective* days of using! And I think that 45 US Dollars is a very fair price. Somebody complained about it?
Although there will always be someone who complains, very few people complain about the price, fortunately. I think that if you’re a writer struggling with a long text, if you try Scrivener and it *clicks*, you will immediately realise that the price is quite cheap for what you are getting (someone recently described it as “Photoshop for writers”, which is exactly what I set out to create). When Scrivener first went on sale, $45 was quite cheap for software in general, and especially for software with Scrivener’s deep feature-set. I think we could easily have charged $200 for it, but we wanted struggling writers to be able to afford it. In the past few years, though, the Mac App Store has arrived on the scene, and there is a lot of cheap software on there, which has affected user expectations when it comes to price. We wouldn’t be able to put all the effort into Scrivener that we do if we lowered the price, though (I spend many hours every day continually improving it), and I think it is still very reasonable for what it is. Happily most of our users seem to agree!

What do you see in the future of Scrivener? There is a special feature you’d like to introduce?
Well, at the moment I’m working on improved custom meta-data, that allows you to create your own tick-boxes and pop-up lists for your projects. At some point in the future – for version 3.0 – I’d like to look at the possibilities of allowing collaboration between writers on a single project, as that is something that our users ask about from time to time. That’s a huge and complicated job, though, and I’m not looking forward to it! More immediately in the future, we are hard at work on our iOS version. We recently took on another developer to help get it finished, and it’s shaping up nicely – I can’t wait to get it into the hands of our users.

I also noticed another software by Literature and Latte: Scapple. Please, tell us something about it.
Scapple is sort of mind-mapping software – sort of, but not quite. It’s a big, virtual piece of paper, and you can double-click anywhere to start writing, to make notes all over it. Then you can drag one note onto another to make connections between them. It’s really simple to use, and it replicates the way I get thoughts down on paper when I’m planning or thinking about something. Now, please, tell us something about your personal life.
My age is a sore point, as I just hit the big 40 last month! I live in Truro, the capital of Cornwall, where I work from a home office. I’m married with three kids, a boy and two girls, and I made sure all three of them got more interesting names than “Keith” (in England, “Keith” went out of date many years ago). As for hobbies, I try to spend any time I’m not coding writing that elusive novel, but I also like to go to the beach when it’s not raining (so, a couple of times a year). Although, I’ve only ever taken two surfing lessons and am terrible at it, so I prefer to sit and read, I’m afraid. At the moment, I’ve got my interest in history back (my undergraduate degree was in history) and am reading lots about the fall of the Roman republic and the start of the Roman empire. I’m boring my wife by reciting at great length everything I learn about the rivalry of Marius and Sulla, Lucullus and Pompey and so on. We actually have some sun here now, so I should probably get out more…